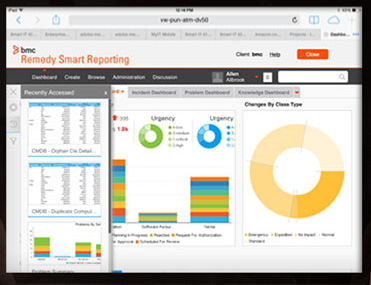 Remedy 9 is helping BMC win against ServiceNow based in part on its innovative MyIT, Smart IT and Smart Reporting components:

Smart IT replaces the current user interface with one that is more like Facebook–more collaborative, designed for mobile first. It is a persona-based approach with specific roles such as first and second line techs, field support techs, and service desk manager.

MyIT empowers end-users to ensure they always have access to the right technology and support services, no matter where they are, all from one easy to use smartphone app.

Smart Reporting, like reporting in Salesforce, enables users to build custom reports with ease. Even better, users can share, follow, and comment on graphs and charts to get the whole team engaged in making better decisions.

MyIT Service Broker is a consolidator of services catalogs from multiple source, providing users with a single self-service app for all their business needs. MyIT Service Broker lets organizations aggregate and manage, deliver and track hardware, software, and services from multiple cloud-based and on-premises sources in a modern service app store.

Medical Center. A large medical center went live with Remedy 9 in December and is piloting MyIT to replace SRM, eventually supporting 14,000 users. They also have big plans for Smart IT and Smart Reporting.

University. A local university went live with v9 in early January. They are not using Smart IT, but will roll out MyIT and Smart IT in the near future.

A large Civilian Agency. A division of a large civilian agency is still under construction but plans to go live with Smart IT, MyIT and Smart Reporting this summer. Lots of interest around Smart IT.

Civilian Agency. A long time RightStar customer went live in January with v9 and rolls out Smart IT to a non-IT Financial group on Monday. RightStar helped build the knowledge base.

Another long-time Civilian Agency will go-live in April with v9 with Incident and Knowledge Management only. Smart IT and Smart Reporting will follow in later phases.

A DOD Agency. A new agency created to provide consolidated IT services will go live in June with Smart IT, Smart Reporting, and MyIT installed, but limited functionality. Later phases will provide more functionality.

A Fortune 10.. This bank is a RightStar BMC redirect moving to v9 this summer. MyIT will eventually support 105,000 users. To prepare for this rollout, RightStar has already completed the MyIT Architectural design.

A Civilian Agency. This agency recently made the decision to standardize on Remedy, in part based upon the strength of MyIT Service Broker. Catalog sprawl is a current issue as they have multiple “hard” and “soft” existing service catalogs. Their objective is to bring everyone together under one roof. One significant objective is to significantly reduce the delays that new employees and contractors face getting new hardware and software provisioned.

I am the President and founder of RightStar, Inc, an XTIVIA company. RightStar is a leading ITSM and DevOps consultancy and BMC Software Elite Solution Provider and Atlassian Gold Partner. My passion is customer success—whether it’s reducing the cost of service management, improving overall efficiency, or increasing end-user or employee satisfaction. Since founding RightStar in 2003, RightStar has made the INC 5000 list four times. In 2011, RightStar was awarded the prestigious National Capital Business Ethics Award (NCBEA) by the Society of Financial Service Professionals based upon RightStar’s foundation of honesty, ethics, and integrity. And in 2014, RightStar was selected by Forrester Research as one of 13 North American companies profiled in its ITSM Consultancy Wave Report. In 2019, BMC selected RightStar as its DSM North American Partner of the Year for its sales and partnership excellence. Finally, in November 2020, RightStar was acquired by XTIVIA, an innovative IT Solutions Provider. Dick is a graduate of Stanford University and a Project Management Professional (PMP).
View all posts by dick1stark →
This entry was posted in BMC, Business Management, Remedy, RightStar, ServiceNow, Uncategorized and tagged MyIT, Remedy 9, ServiceNow, Smart IT, Smart Reporting. Bookmark the permalink.