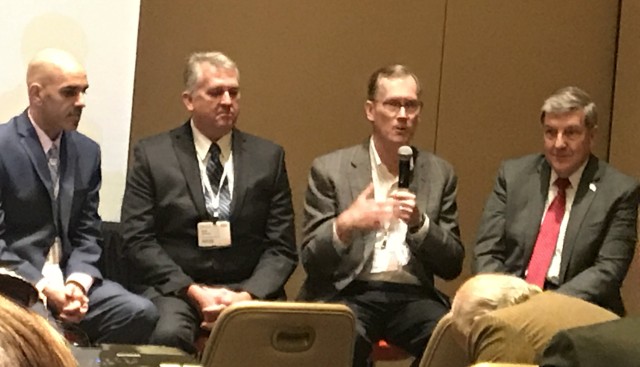 LTG Alan Lynn, former Director, DISA opened the session with a discussion of DOD moving to the cloud. Since DISA is the current DOD cloud provider, he discussed the importance of cost reduction as DISA starts to square off against large emerging DOD cloud providers like AWS.  (If the CIA can move to the cloud, then so can the DOD). The second cloud driver is standardization. General Lynn stated that the DOD has more than 30,000 different apps, not all of which will migrate well. A cloud migration will eliminate lots of lower impact apps and consolidate many others.

Next up was Dave Wennergren, Managing Director, Deloitte, and former Army CIO. Dave presented his “Top 10 List,” of tech issues that are the focus of government in the months ahead. Any guess about #1?  “Change happens,” said Dave, “and we in government run the risk of being left behind.” Dave’s parting advice: Have a plan, move with speed, engage customers throughout the process, move into the future boldly, and communicate relentlessly.

Dan Streetman, BMC Senior VP, Worldwide Strategic Sales and Operations “parachuted in” (you had to be there) and talked about the digitalization of government. Using BMC’s FY 2019 tagline of Optimize, Transform, and Create, he cited several examples of government done well, like real time earthquake information from the US Geological Survey, SSA’s use of big data to make life saving information available to researchers, and radically improving GPS to aide the warfighter. He also gave several specific BMC customers, DLA with its Digital Workplace initiative, DISA’s STIG server compliance spin up from days to minutes thanks to BMC SecOps, and the Federal Reserve Board’s move from Remedy on-premise to Remedy as a Service (formerly Remedy OnDemand).

The final keynote speaker was Kathryn Haun, a former DOJ prosecutor, and Blockchain, Cryptocurrency, and Cybersecurity expert. She discussed her role in prosecuting Dark Web cybercriminals including the rogue DEA and Secret Service agents involved in the shutting down of the Silk Road website. (This story will soon to be a major motion picture). Kathryn also detailed the computer science behind blockchain and her predictions for the future—it’s going to be huge. She said that in 10 years, 10% of the world’s GDP will be on blockchain.

Overall a great day for BMC and its Federal customers!

I am the President, CEO, and founder of RightStar Systems, a leading ITSM and DevOps consultancy and BMC Software Gold Solution Provider and Atlassian Platinum Partner. My passion is customer success—whether it’s reducing the cost of service management, improving overall efficiency, or increasing end-user or employee satisfaction. Since founding RightStar in 2003, RightStar has made the INC 5000 list four times. In 2011, RightStar was awarded the prestigious National Capital Business Ethics Award (NCBEA) by the Society of Financial Service Professionals based upon RightStar’s foundation of honesty, ethics, and integrity. And in 2014, RightStar was selected by Forrester Research as one of 13 North American companies profiled in its ITSM Consultancy Wave Report. Finally, in 2019, BMC selected RightStar as its DSM North American Partner of the Year for its sales and partnership excellence. Dick is a graduate of Stanford University and a Project Management Professional (PMP).
View all posts by dick1stark →
This entry was posted in BMC, Business Management, RightStar, Uncategorized and tagged BMC Exchange Federal, BMC Exchange Federal 2018, BMC Remedy, BMC SecOps, LTG Alan Lynn, Silk Road. Bookmark the permalink.