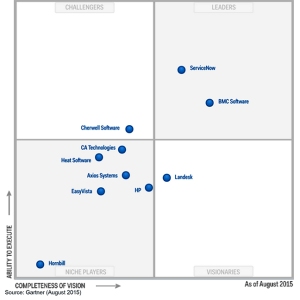 Many of you have already seen the August 26, 2015, Gartner Magic Quadrant for IT Service Support Management Tools. In this report, Remedy continues in IT’s holiest of holy places, the upper right corner. Last year’s report clearly gave the top spot to ServiceNow (SNOW), a position held by Remedy from November 2010 to August 2014. This year’s report arguably shows Remedy and SNOW tied for first place although Remedy scored higher marks in technology and strategy. The timing of this news could not have been better with Engage 2015 just two weeks later. There are many bright spots, but also much work ahead for BMC as SNOW remains a formidable competitor. For instance:

BMC is still the market share leader as a result of its many ITSM platforms (Remedy, Remedy on-Demand, FootPrints, Remedyforce, and Track-It!).

Remedy is making a strong comeback. BMC is not going to allow SNOW to eat its lunch forever and is starting to regain its mojo. For example, Remedy 9 is a big hit, as is Smart IT, a new FaceBook like front-end for Remedy, now on its second major release. Even better, BMC learned from its award winning MyIT, that users feel they have paid enough for Remedy. So, Smart IT is free. The good news is that the Gartner evaluation pitted SNOW’s latest release against Remedy version 8, which means there is lots of room for improvement in the ITSSM 2016 Magic Quadrant.

SNOW is everywhere and doing everything. With its huge sales and marketing force, SNOW is invited into every deal. Two years ago, SNOW CEO Frank Slootman remarked to a group of analysts, “Our customers are actually frustrated because it’s tough to negotiate with a vendor who doesn’t have much competition.” This was borne out by the Gartner caution, “ServiceNow’s customers find it difficult to negotiate favorable contractual terms.” For customers that are price sensitive or looking for good value, there are other less expensive options like Remedyforce and FootPrints.

BMC’s mid-market strategy is confusing. All Engage product presentations made it clear that Remedy was BMC’s enterprise offering, and Remedyforce, BMC’s mid-market offering. And it is true that MyIT and other products like TrueSight and BPPM integrate well with BOTH Remedy and Remedyforce. BMC executives assured the attendees that FootPrints has a bright future as a strong all-in-one mid-market on-premise solution with a defined roadmap for future enhancements and growth. The message from BMC sales is to lead with a defined ITSM solution. Do not present multiple solutions and let the prospect decide.

What’s significant is that no one disagrees about Remedy’s position as the most fully functional ITSM solution available, period. SNOW excels because of its entire ecosystem.

This means that there is plenty of life left in BMC and its family of ITSM solutions, and continued opportunity ahead for RightStar with Remedy, Remedyforce, and FootPrints.

I am the President, CEO, and founder of RightStar Systems, a leading ITSM and DevOps consultancy and BMC Software Gold Solution Provider and Atlassian Platinum Partner. My passion is customer success—whether it’s reducing the cost of service management, improving overall efficiency, or increasing end-user or employee satisfaction. Since founding RightStar in 2003, RightStar has made the INC 5000 list four times. In 2011, RightStar was awarded the prestigious National Capital Business Ethics Award (NCBEA) by the Society of Financial Service Professionals based upon RightStar’s foundation of honesty, ethics, and integrity. And in 2014, RightStar was selected by Forrester Research as one of 13 North American companies profiled in its ITSM Consultancy Wave Report. Finally, in 2019, BMC selected RightStar as its DSM North American Partner of the Year for its sales and partnership excellence. Dick is a graduate of Stanford University and a Project Management Professional (PMP).
View all posts by dick1stark →
This entry was posted in Business Management, ITSM, Remedy, ServiceNow and tagged BMC, FootPrints, Gartner, ITSSM Magic Quadrant, MyIT, Remedy, Remedyforce, ServiceNow, Smart IT, Smart Reporting. Bookmark the permalink.