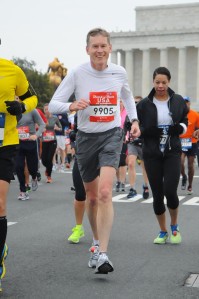 “If you had to pick one thing to make people healthier as they age, it would be aerobic exercise.”

The annual Cherry Blossom Ten Mile Run was run last Sunday in Washington DC.  For me, this marks the beginning of spring, and even though the cherry blossoms were late bloomers this year, it was a spectacular day for a race.

I’ve realized for some time now that my best running times were behind me, but this year was different–I beat last year’s time by more than 30 seconds, something I hadn’t been able to do for a number of years. And that gives me hope, or at least something to look forward to and a good reason to begin training now for next year.  Can I beat back time for two years in a row?  Why not??

After more than 20 years of Cherry Blossoms, I still get excited about running down Independence Avenue, past the Lincoln Memorial and then over the Memorial Bridge, before winding past the Tidal Basin and then back home to the Washington Monument. There have been some changes over the years—like having 4,000 runners to now more than 17,000.  And where do all those fast runners come from?  (One doesn’t just get out of bed and decide to run that morning. To run 10 miles requires some preparation.)  Also, why so many young people?  My age group, men 55-59, had 365 finishers.  My daughter’s age group, women 25-29, had 2,807 finishers.  (Yes, she beat me again this year.)

At least I can take some comfort in knowing that running into old age is good for you. According to researchers at Stanford University, running slows the aging clock. That study followed runners over the age of 50 for 20 years and compared them to a similar group of non-runners. It found that elderly runners have fewer disabilities, a longer span of active life and are half as likely as aging non-runners to die early deaths.

I am the President, CEO, and founder of RightStar Systems, a leading ITSM and DevOps consultancy and BMC Software Gold Solution Provider and Atlassian Platinum Partner. My passion is customer success—whether it’s reducing the cost of service management, improving overall efficiency, or increasing end-user or employee satisfaction. Since founding RightStar in 2003, RightStar has made the INC 5000 list four times. In 2011, RightStar was awarded the prestigious National Capital Business Ethics Award (NCBEA) by the Society of Financial Service Professionals based upon RightStar’s foundation of honesty, ethics, and integrity. And in 2014, RightStar was selected by Forrester Research as one of 13 North American companies profiled in its ITSM Consultancy Wave Report. Finally, in 2019, BMC selected RightStar as its DSM North American Partner of the Year for its sales and partnership excellence. Dick is a graduate of Stanford University and a Project Management Professional (PMP).
View all posts by dick1stark →
This entry was posted in Business Management, RightStar and tagged Cherry Blossom 10 Miler, Endurance, exercise, masters running, running. Bookmark the permalink.