David and Goliath at RightStar 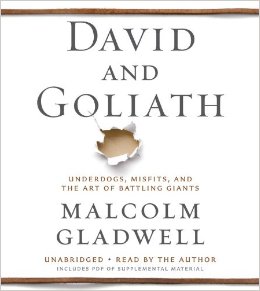 But the Lord said to Samuel, “Do not look on his appearance or on the height of his stature, because I have rejected him: for the Lord does not see as mortals see; they look on the outward appearance, but the Lord looks on the heart.”

David and Goliath is Malcolm Gladwell’s newest soon-to-be bestselling book.  Subtitled Underdogs, Misfits, and the Art of Battling Giants, the book provides hope for the little guy. In case you don’t know, Gladwell is a sociologist that writes interesting books such as Outliers, where the idea of the 10,000 hour rule came from.  (Both Bill Gates and the Beatles practiced at least 10,000 hours before excelling in their fields, computer programming and music, respectively.)

In David and Goliath, Gladwell tells stories such as why it is better to be a big fish in a small pond.  He uses an example of a Brown University student that excelled in everything in high school but was so challenged at Brown in Chemistry, that she dropped the class and changed her major to a non-scientific one. Had she gone to the University of Maryland (a smaller pond academically) she undoubtedly would have not dropped Chemistry and her life would now be on a different path.

Gladwell also discusses specific examples of successful underdogs with significant disabilities such as dyslexia and loss of a father at an early age.  In other words it may be better to bet on someone with a disadvantage, and he sites successful businessmen, researchers, artists, athletes, and others that all started as underdogs.

How does this apply to RightStar?  Certainly RightStar as a small business must be at a significant disadvantage when competing for work against computer behemoths like IBM, HP, or 200,000 person consulting organizations such as Accenture or Deloitte. Not necessarily.  It’s very difficult for such large companies to be as focused and compassionate about BMC and Service Management as we are. How does RightStar compete with such giants?

Passion for the business. At all levels, it is critical that we are emotionally attached to service management, to each other, to BMC and its employees, and most importantly, to our customers. We must also be willing to try harder than anyone else.

Unusually intimate workplaces.  My vision for RightStar is to treat employees with respect, dignity, integrity, fairness, kindness, and generosity.  In that sense, I hope that we will continue to recognize one another as family and as a company that people want to work for.

Owners are in control. I’m proud that I’ve had the opportunity to help build the kind of company we all want, rather than let RightStar be shaped by outside forces.  Several RightStar employees joined us from an ex-BMC partner.  That partner company brought in outside investors, and before long, the company was out of the BMC solution provider business.

If we can continue to do these things, then we can all agree about the power of underdogs and misfits.   The powerful and strong are not always what they seem.

I am the President and founder of RightStar, Inc, an XTIVIA company. RightStar is a leading ITSM and DevOps consultancy and BMC Software Elite Solution Provider and Atlassian Gold Partner. My passion is customer success—whether it’s reducing the cost of service management, improving overall efficiency, or increasing end-user or employee satisfaction. Since founding RightStar in 2003, RightStar has made the INC 5000 list four times. In 2011, RightStar was awarded the prestigious National Capital Business Ethics Award (NCBEA) by the Society of Financial Service Professionals based upon RightStar’s foundation of honesty, ethics, and integrity. And in 2014, RightStar was selected by Forrester Research as one of 13 North American companies profiled in its ITSM Consultancy Wave Report. In 2019, BMC selected RightStar as its DSM North American Partner of the Year for its sales and partnership excellence. Finally, in November 2020, RightStar was acquired by XTIVIA, an innovative IT Solutions Provider. Dick is a graduate of Stanford University and a Project Management Professional (PMP).
View all posts by dick1stark →
This entry was posted in Business Management, RightStar and tagged BMC, David and Goliath, Malcolm Gladwell. Bookmark the permalink.